Millions of people browse through the platform to plan out their future purchases. Unlike other social media sites, Pinterest users are laser-focused on brand offerings exclusively.

It’s emerging as a platform for branding and e-commerce. Marketers should pay attention to the below listed Pinterest statistics before planning their marketing and SEO strategy.

Let’s see what the stats say.

Witnessing the spike to 444 million Pinterest users, it has been the hotspot for identifying trends across multiple industries. Another interesting thing to note is that the platform’s popularity is not just in the U.S. alone. 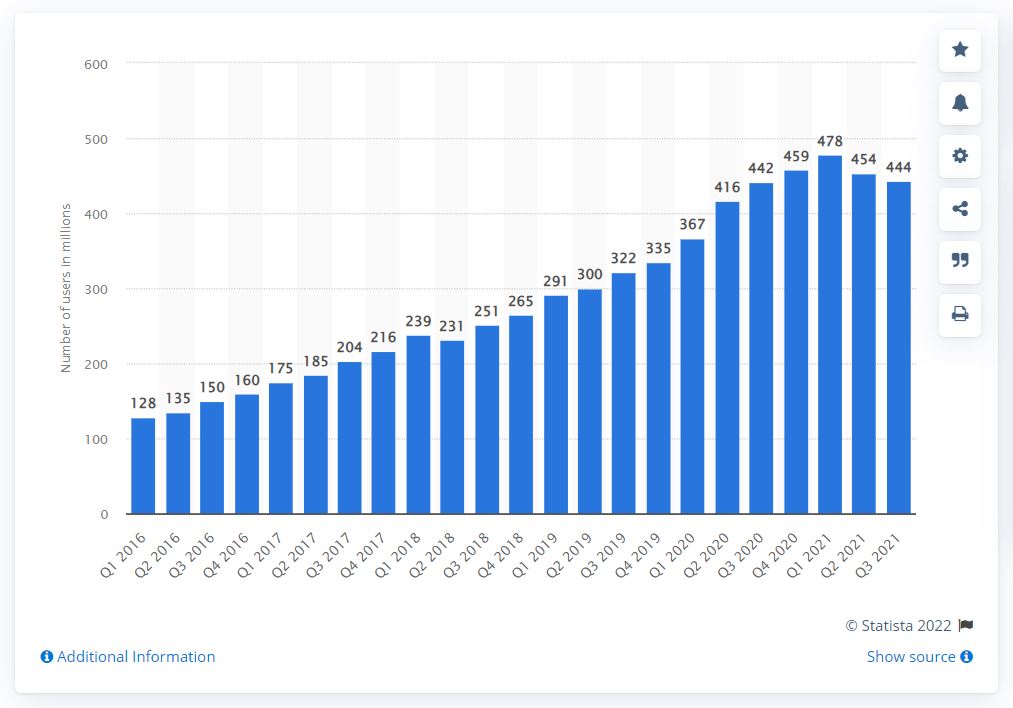 Professionals and experts share their top secrets and hacks on the platform and educate their followers to grasp the best ones. Therefore, users huddle up and search more than 2 billion queries each month on Pinterest.

There are also 5 million-plus boards with thousands of pins to spark your creativity. Like other social media, 74% of all Pinterest users use the app aiding in 85% of Pinterest usage via mobiles. Have a look at more Pinterest statistics to get some idea about its usage metrics.

Thanks to videos, Pinterest is no longer all about just pinned images and link posts. Pinterest stats show that video views have increased by 200%, wrestling in heavy engagement. 55% of Pinterest users use the platform with the intent to shop and buy, generating direct sales for most marketers.

Apart from regular searches, there are also 600 million visual searches via Pinterest lens each month. So if any non-following user stumbles across your product, they can give it a quick scan and purchase the item from you!

How cool is that?

Here are some more Pinterest statistics on engagement to help you create better promotional strategies here.

Interesting Read: 25 Dos and Don’ts for Your Pinterest Marketing Strategy

There’s definitely some good news for marketers who have continued to use Pinterest for business. Interactions with Pinterest shopping pins have increased by 44%.

If you are a lesser-known brand, Pinterest can help you kickstart as 97% of the Pinterest searches are unbranded. It’s also recommended to go for several pin types like rich pins, product pins, videos, etc.

You can even consider promoting them as 61% of Pinterest users have made a purchase because of sponsored pins. Check out these Pinterest stats for using the platform to boost your business the right way. 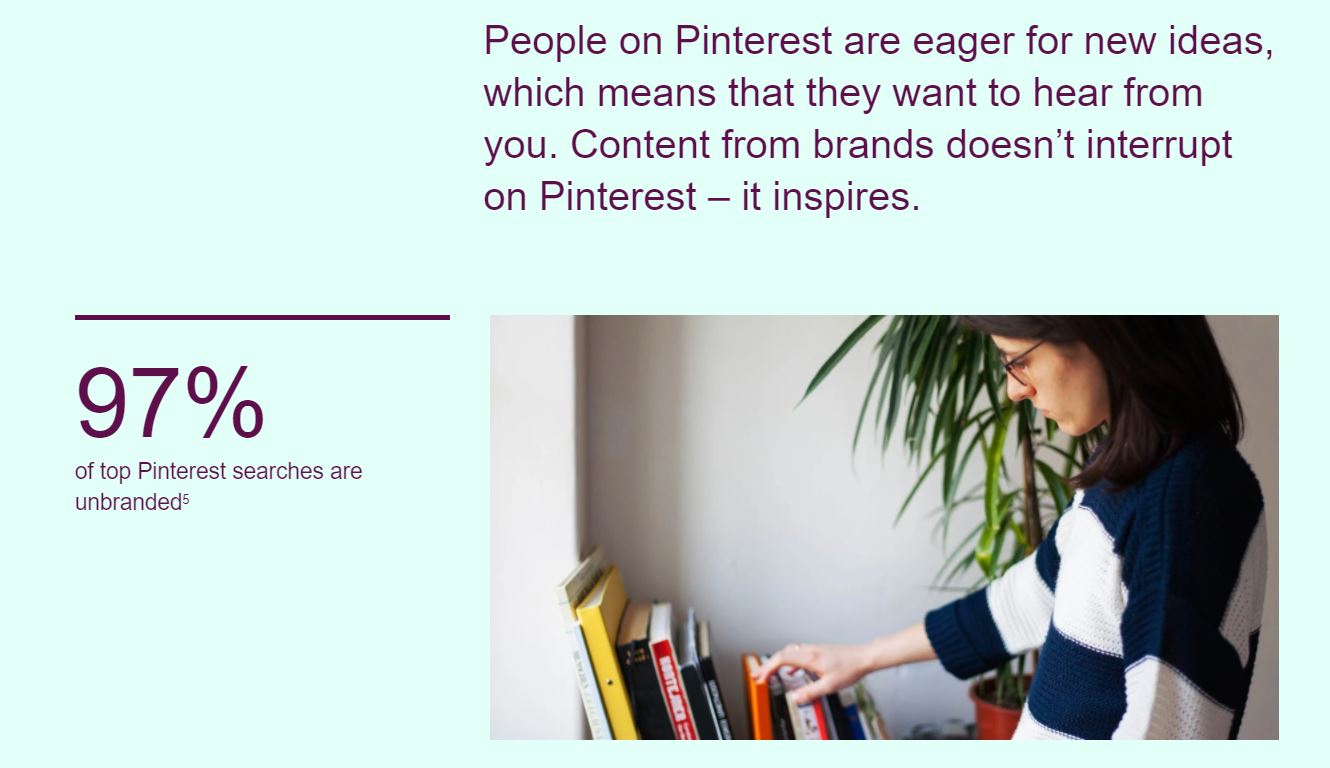 Pinterest ads can potentially make you reach millions of people, with the quarter-on-quarter reach increase by 4.4%. The best part is 78% of Pinterest users have agreed that branding content, including ads, are very much relevant to their interest, and they would continue to look for them even in the future.

So we suggest pinning almost 5-6 times daily to create a consistent presence on the platform for better branding and reach.

Posting and sponsoring your pins will definitely improve your metrics and help you accomplish your social selling goals faster on Pinterest. Here are a few more Pinterest statistics on ad demographics and performances.

Want to give your Pinterest profile a makeover? Learn from these top brands who have been consistent on the platform and managed to pull off following in millions.

Observe their boards and how frequently they pin and go live to connect with their users on the forum. Here are our top 5 picks with their Pinterest stats to help you create your Pinterest marketing strategy.

Interesting Read: Everything You Need to Know About Pinterest Promoted Pins

Pinterest is a valuable source of reliable information for many. Hence, if you are a marketer, leaving out on this platform is a major miss.

Why? 7 out of 10 Pinterest trends predictions have already come true.

While we understand the Pinterest statistics we discussed in the blog are quite encouraging, marketers will step back from committing to frequent pinning as they have too much to manage already.

That’s why we recommend using SocialPilot. It lets you plan out your pinning strategy and helps you build a presence on just on Pinterest but on 8 more platforms.

You can plan your posting timings, frequencies, edit them on the go with Canva integration, and keep a tab even on performance with analysis.

Take its free 14-day trial and upgrade your presence on Pinterest hassle-free.

Less than 20% of the Pinterest user base is male, approximately 15% of the total user base. The U.S alone has 21.9 million male users.

No, Facebook doesn’t own Pinterest. It is a publicly-traded company. Ben Silbermann is its CEO and Co-Founder.

Sweta Panigrahi is a Content Writer at SocialPilot. Her strongest pursuit is to capture social media happenings in her well-researched blogs. From codes to meme posts, her search history is a confounding mess. When not typing out blogs, you can find her in a sunny corner scribbling poems. 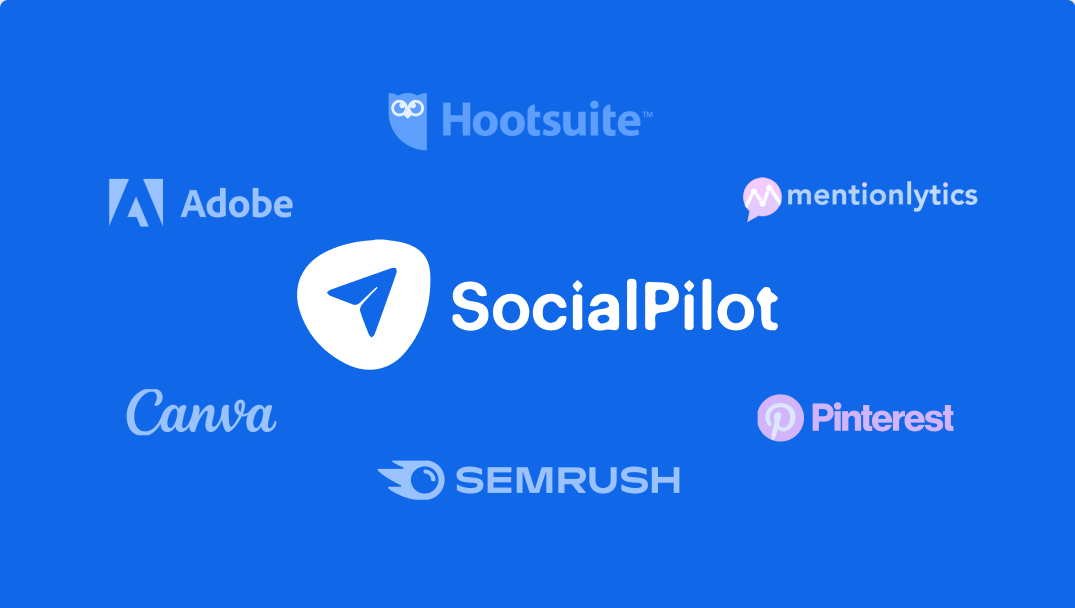