How to Use Emojis to Boost Your Social Media Posts?

A ceaseless string of texts can make your readers run away. Unless you couple it with emojis!

Emojis are saviors in the texting world that transform the lengthy chunks of words to expressive conversations.

A study by Emoji Consumer Science Team shows almost 92% of the online population is using emojis to express themselves. This statistic keeps increasing with frequent releases of new emojis that let you emojify your text in a jiffy. 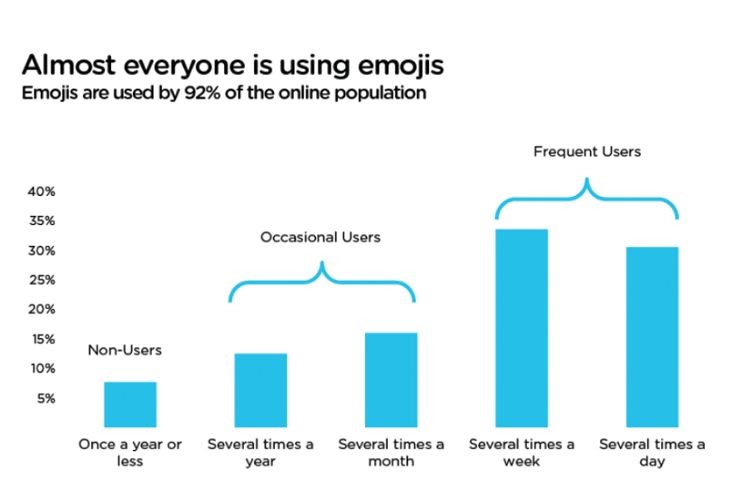 But the major question that pops up often is if emojis can find their application beyond amiable interactions? If yes, then how to use emojis for business purposes?

Brands have come a long way in pathos marketing strategies for impulsive surges. Yet many ponder how to use emojis to connect with their audience and induce emotions in them.

If done right, emojis can give that essential twist to any branding posts, making them fun, engaging, and interactive. For that, we need to dig deep and understand these illustrations better.

Did you know that the first emoticon was created in 1982 by Scott E. Fahlman, a computer scientist at Carnegie Mellon University?

He could have made a lot of money from trademarking the emoticon. However, Mr. Fahlman did not choose to file a trademark.

But now, we have come a long way. Using emojis is an integral texting habit. It is a great way to get the attention of thousands of social media users.

People are constantly on their phones and computers, scrolling through their Twitter, Facebook, and Instagram feeds. And emojis help you be distinguished from the crowd to garner better interaction and engagement. 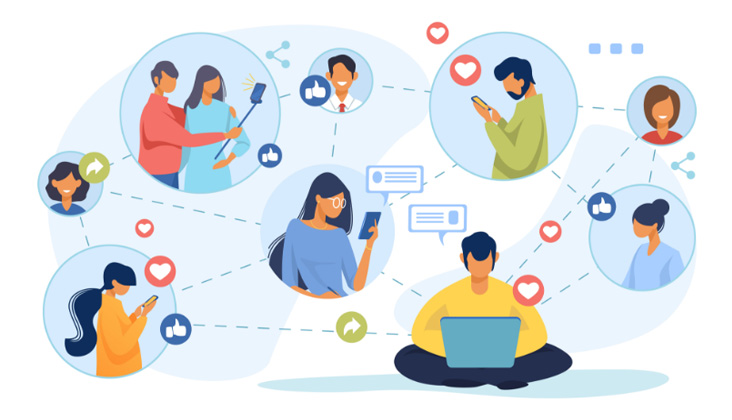 Examples of How Brands have Used Emojis

The first brand on the list for the successful utilization of emojis is Domino’s. Domino’s has ingeniously incorporated the concept into its branding propaganda. It even allowed its customers to place their orders with pizza emoji. 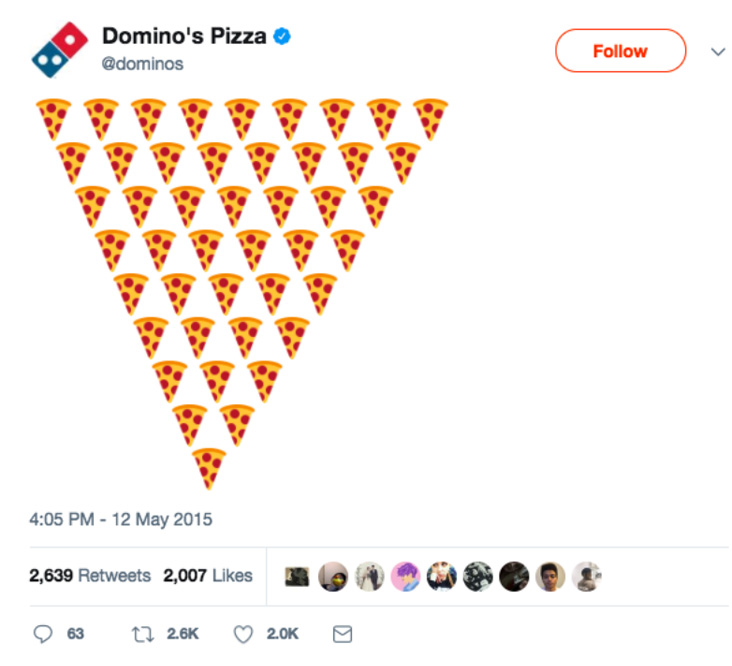 You can also check out Domino’s Anywhere, which allows you to order a pizza through a bunch of ways, the easiest being by tweeting a pizza emoji to them.

Similarly, Chevrolet got a lot of attention from its emoji press release. 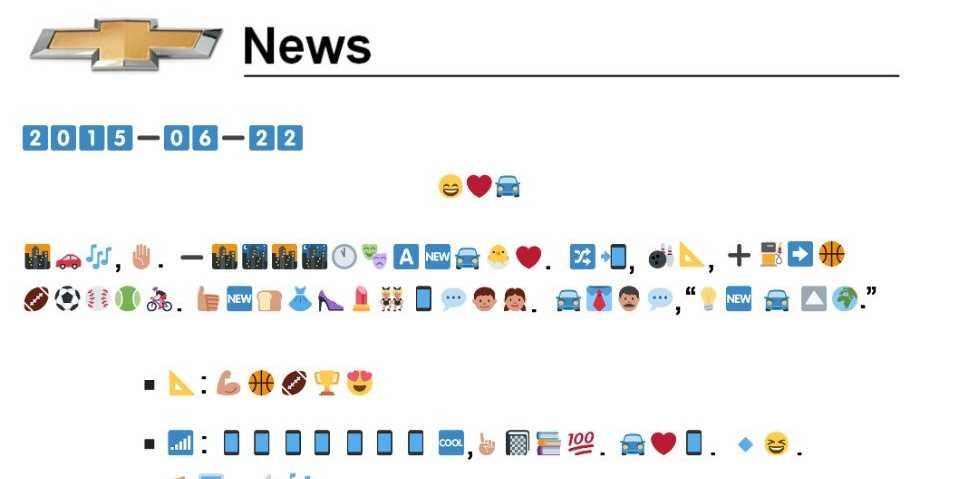 Consequently, this serves as a perfect example of what can go wrong if we go overboard with emojis. Chevrolet published a press release using just emojis.

As revolutionary as this was, some readers were left confused, while others thought they took it too far. So be aware of how to use emojis the right way. Otherwise, it can leave your reader dazed and confused.

How to Use Emojis on Social Media

Elite brands constantly explore new and evolving ways to use emojis to engage their consumers on social media platforms. 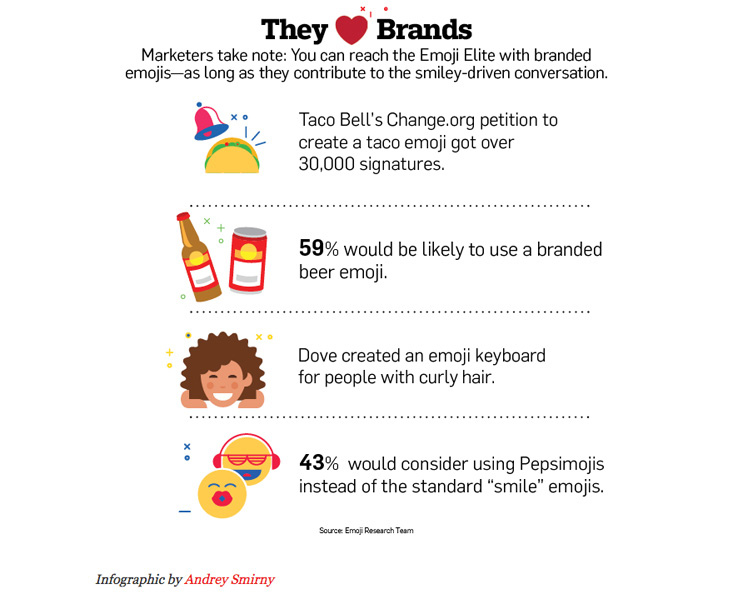 Now, you may have thought emojis were only popular among the younger generation, preferably between 18-25. But gender is more of a factor in the use of emojis than age.

1. How do People Use Emojis?

People are using emoticons as the preferred method to express their emotions. On platforms like Twitter, character limits stop us from expressing our feelings. Additionally those on platforms like Instagram, nearly half of the comments and captions are emojis.

There was a study on emoticons completed by TalkTalk and Bangor University Professor of Linguistics Vyv Evans. She states that there is a 62% increase in the use of emojis than a year ago. These results should not be surprising. It is easier to express your feelings through an emoji. The popularity of the use of emojis varies in different countries.

The most popular emoji in the US is the laugh-out-loud emoji (😂), as per Madison reports. 9 To 5 Mac recognizes the following emoticons as the top 5 favorite emojis worldwide.

According to an Emoji Consumer Science team, women are using emoticons more than men.

2. How are Emojis Replacing Words?

As a result, digital communications are evolving and becoming shorter. Now we are in a fast shift from the use of full-word internet mnemonics to simple emojis. 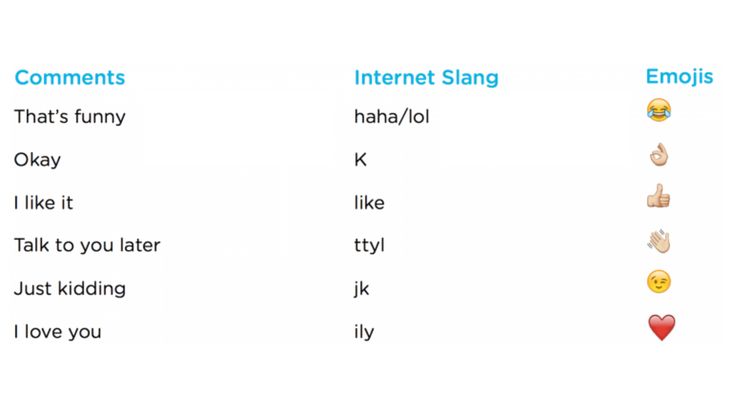 These days smartphones provide a “tap to replace emoji” feature. Just type your message and click on the emoji button. You will receive suggestions for all the emojifiable words.

3. Emojis to Express More Than Words

More than ever, teens want to use emojis to communicate. The reason lies in it being a short, fast and expressive way to communicate. For a teenager, sending emojis with every text is quite common.

They have also become popular in pop culture. Katy Perry released a video of her song “Roar,” conveying the song’s lyrics through emojis. 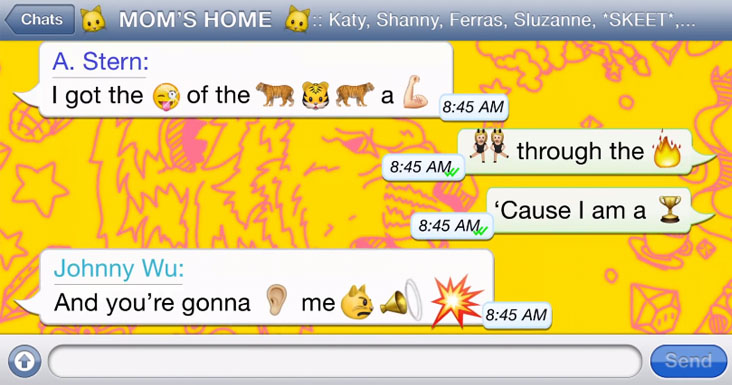 We have come a long way with the use of emojis. More people have started to express themselves with them. As technology expands, there truly is no limit to what can be expressed.

Using Emojis on the smartphone is pretty simple and comes naturally to us. However, using emoticons on a laptop or computer can be a little tricky.

To use emojis on the Mac, press control + command + space bar for the emojis screen to appear. 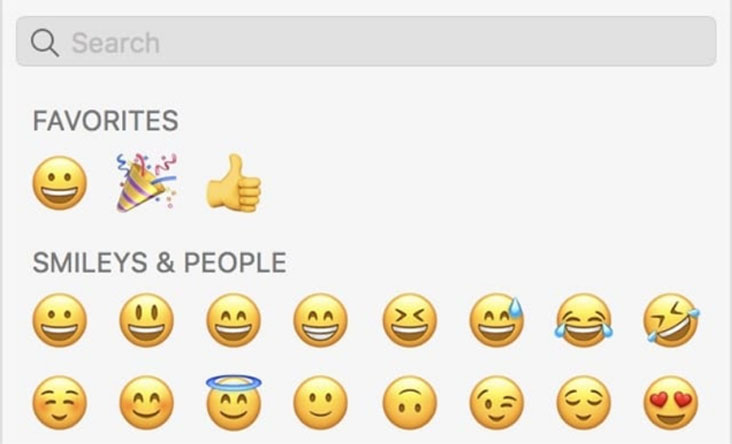 To use emojis on a Windows PC, press Windows logo key + . (period). Additionally, you can visit this emoji website to copy and paste emojis that you love.

For iOS users, there is an option to use the Feathers app to beautify their tweets. This app is rated #1 among Japanese social media users.

There are alternative ways to add emojis to your tweets by adding shortcuts to your browser. You can try tools like Twitterkeys, Unicode Symbol Map, and TwitterSymbols to add to your PC browser.

With the popularity of these social platforms, there is more content than ever being uploaded to the internet daily. To make it easier, people express themselves, and share their feelings fast by using emojis.

The Emoji Consumer Science Team made a striking revelation that we choose a positive emoji for cognitive reasons and not for emotional reasons. 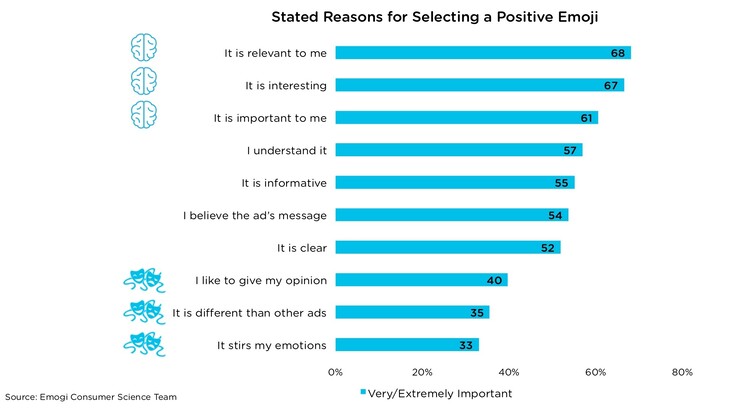 As per YouGovAmerica reports, 57% of Facebook posts with emojis get more likes, and 33% have more shares and comments. Instagram posts and tweets with emojis increase engagement rate by 48% and 25%, respectively.

Twitter is a platform that limits our character count for each post to only 280. It becomes impractical to express your feelings on Twitter by only using normal text. Therefore, emojis play a vital role on Twitter.

We can convey a wide range of feelings within the character limit by using emojis. You can use social media tools to easily use emojis while posting to multiple social platforms at once. 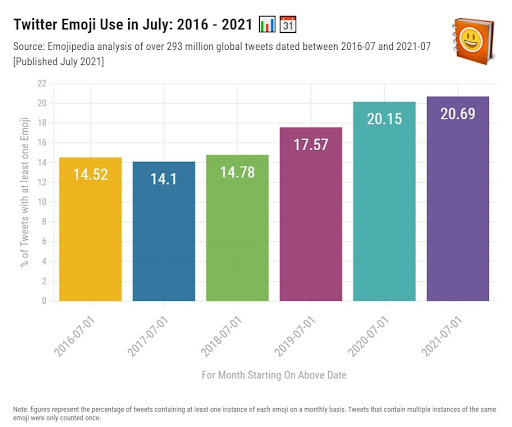 The social media giant, Facebook, introduced its fans with six more emoticons. This is in addition to the like button to react and interact with the posts. Below are the emoticons that are now used as reactions on Facebook.

Facebook is additionally on a spree to launch newer emojis every year, including yearly trends and happenings.

Instagram is the social platform leading in the usage of emojis. Nearly half of the comments and captions on Instagram are emojis.

Instagram users are taking full advantage of the emoji feature in the stories and reels tool. Here are the most used emojis on Instagram by brands and influencers. 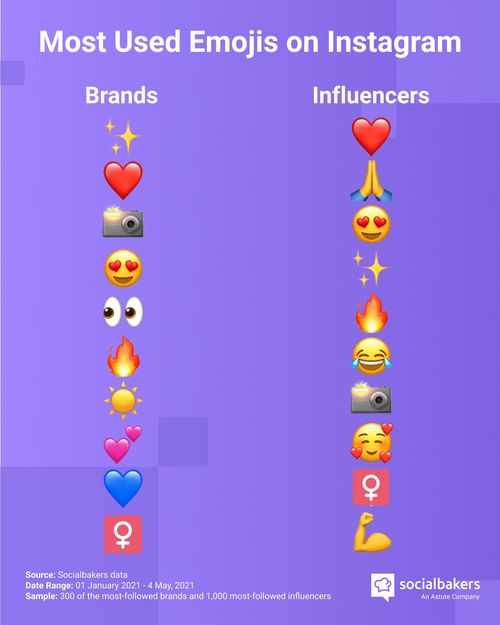 Socialpilot allows you to easily add emojis in your social media posts from its post composer section. With this, you can streamline your brand messaging on multiple social platforms and make it interactive and engaging.

The emoji kit in SocialPilot gives you a varied spectrum of emojis to choose from. Navigate through different sections of emojis and find the best one to put your emotions across your audience.

The search bar in the emoticon section cuts down any remaining hassles of finding any eccentric emoji. Just type in the name and the requested emoji will appear automatically.

So now you know how to embed emojis in your scheduled posts on multiple social media platforms using a robust social media scheduling tool like SocialPilot.

Unlocking the Marketing Power of Emojis

You can find these illustrative lilliputs scattered in text messages, comments, stories, bios, captions, videos, and more. Apart from adding the glitzy element to an otherwise monotonous block of text, emojis help us express our feelings much better.

And that is the very goal of posting on social media – to connect with people! Drive the most attention to your content by making it an absolute standout with emojis.

However, be careful not to take it too far. Pick those emojis that are best suited to your brand and integrate them into your marketing message with the help of social media marketing tools.

Get started with an easy tool like SocialPilot. Take its free trial and revolutionize your marketing undertakings.

🌟 Should you use emojis in social media posts?

Yes, you should use emojis in social media for impactful messaging and garnering instant attention. You can use emojis in captions, comments, stories, and direct messages.

🌟 How to use emojis for effective communicate?

Text alone is devoid of any kind of tonality and is often misinterpreted. However, the right emojis can help in effective communication. They are much more expressive and concise when compared to text blocks.

🌟 How to use emojis on social media?

Here are some tops tips on how to use emojis on social media:

🌟 What is the benefit of using emojis in posts?

🌟 Why are emojis so important?

Emojis are important for making your brand more humane and interactive. People tend to consider them more formal if they avoid using emojis in their marketing strategy. So to break the corporate ice, brands must use emojis on social media.

🌟 Do posts with emojis perform better?

Posts with emojis do perform better. As per YouGovAmerica reports, 57% of Facebook posts with emojis get more likes, and 33% have more shares and comments. While Instagram posts and tweets with emojis increase engagement rate by 48% and 25%, respectively. 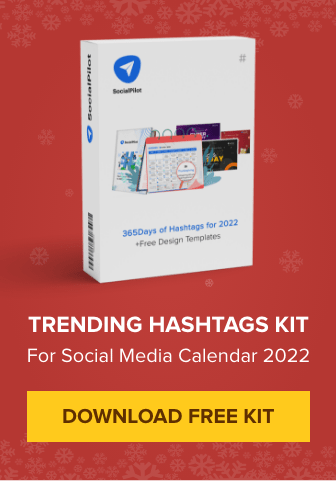 12 Stunning Social Media Automation Tools to Use in 2022
4 Ways Emojis Can Breathe Life Into Your Marketing Strategies
How to Use Hashtags Effectively in Social Media Marketing?